Suddenly Ted Cruz has something in common with Bill Clinton. 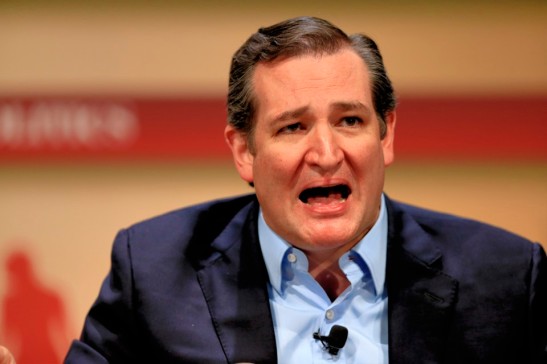 Years ago, the CBC comedy news show This Hour Has 22 Minutes put a “reporter” out front of Rob Ford’s house. When he lurched out towards his Escalade, she pounced, running up the driveway. Ford looked perturbed, got in his big honking SUV and drove off. The comic tittered at his expense, and I got mad. It was one of those rare occasions when I felt sympathy for an otherwise fairly awful man, then the Mayor of Toronto.

Why? Because public figures are people, too. They ought to have some space, some privacy, some peace. Yes, they beg for our attention and yes, they spend much of their time hogging the limelight. But they – and their loved ones – are at root just as human, fragile, needy and imperfect as you are (maybe more so) and they do NOT deserve to have their lives invaded, incessantly. Not on their own driveways.

Because privacy is so essential to one’s personality, one’s sanity, it has to be protected even for the most public of people. That is why an actress or model should never have her private photos leaked to the media – even if she spends half her career undressed. Only SHE gets to decide when she is seen unclothed. Not YOU.

Which takes us to this Good Friday, to the not so good news for US Senator and Presidential aspirant Ted Cruz. According to the twitterverse, the Senator has had a number of affairs with women not named Heidi Cruz. So far, the mainstream media are avoiding the story but that won’t contain the floodgates of rumour and humour and spite from gushing into the broader media.

Now Ted Cruz is, for many of us, a truly revolting fellow. I referred to him once as a reptile and later felt bad about it because, after all, what did any reptile ever do to deserve that comparison? And my instinctive revulsion towards the Senator is hardly unique, which may account for the tone of this morning’s internet explosion about his rumoured sex life.

That tone can be described in one word: delight. :Senator Cruz is an uncommonly greasy, sanctimonious, puritanical so-called Christian prig. He has trafficked his alleged religiosity to millions of voters, as his principal calling card. In the process, Cruz has slithered close to bigoted anti-semitism (his comments about Donald Trump’s “New York values” we’re heard everywhere as code for “Jewish”) and he is an outright bigot against Muslims. Senator Cruz has beaten the right wing religious drum daily – hourly – in his campaign, either because he means it, or because it sells, or both.

How bitterly and wickedly ironic then, that on this Good Friday – the day we pause to remember the crucifixion of Jesus of Nazareth – we see his alleged devotee Ted of Naches hauled on up to his own personal Calvary.

I will be honest and say that it’s hard not to enjoy this, because Mr. Cruz is a really odious form of the species Republicanus Ignoramus (he falls into the Christianus Artificialis genus, I think). Yet there are some very good reasons NOT to enjoy it at all:

First of all, there is no proof. That’s often a not very important problem on the Internet (who needs evidence?) but it ought to be a problem. There is this concept of “innocent until proven guilty” and gosh, either it applies to all of us or it doesn’t. Cruz doesn’t think it applies to all of us (not to people named Mohammed, at any rate) but Ted Cruz is not the person who sets my, or your, personal set of standards.

Second, it might turn out to be a lie. In which case, yuck, Ted Cruz actually deserves some sympathy.

Third, it might be true, but if it is, so what? This is the really important question because, just as the truly awful Rob Ford was entitled to a private life, so too is the truly awful Ted Cruz. Yes, that’s right: Ted Cruz gets to have a sex life and it really isn’t any of your damned business. That’s why Bill Clinton could have a shagadelic time in the White House, and elsewhere, and it doesn’t much matter as a measure of his Presidency, his post-Presidency or his wife’s possible future Presidency.

However one may feel towards Mr. Cruz and his professed politics, he and his wife and family do not deserve glaring exposure of their most intimate lives. If he has had relationships outside of his marriage, that may be no secret to his spouse, it may be their “deal” or it may not. The frequency and range of his fornication really is not relevant to his fitness (or in Cruz’ case, manifest unfitness) to hold the highest office in the land. It wasn’t relevant when we thought only one woman slept with him, or now that we think six did. Or do. Or whatever.

The counter argument to that position is that Mr. Cruz, having made such a big deal about his Christian faith and non New York values, has actually placed his personal life in the spotlight and therefore surrendered his right to privacy. This argument has some traction, if fidelity to a particular version of Christian observance has been a central tenet of his “pitch” to the electorate. The basic thrust of this, of course, is that Mr. Cruz might be a hypocrite.

He might. But might also just be human. He might just be a man who aspires to a very stringent behavioural code, and who has failed to be perfect. And in my view, being imperfect – even being dishonest with himself, his spouse, the voters – cannot be a disqualifying fact about a candidate for office. If it is, then no one can hold any office. We want our political figures to be as transparent and ethical as they can be, and we also want them to be competent. But we cannot expect them to be perfect because if that’s the test, then we’re just begging to be lied to.

Besides which, Ted Cruz is disqualified for so many other good reasons, his sex life is hardly necessary material.

If Ted Cruz’ ardently Christian supporters are looking for someone who is perfect, they should look for Him in church, not on the ballot. And if Ted Cruz’ ardent detractors want to declare the Senator unqualified for office, they should do so on the basis of what they know about him outside the bedroom. The Cruz marriage is no more open to dissection than the Clinton marriage, in my view. And Ted Cruz is no more disqualified for having affairs, or lying about it, than anyone else.

So on this, the holiest of days in the Christian calendar, let us remember and reflect on some of the best advice anybody ever gave: “Let he who is without sin, cast the first stone.”  And let us hope that we can resist the terrible urge to watch others hurling rocks.